I guess I have been looking at it all wrong all this while. Concentrating on the smaller picture when I have my whole life ahead of me. My whole life for people to look at what I did before, and see the mistakes along the way. It is a continuous struggle for everything, to get a better career, to look good, to have a better spouse and so on. But it doesn't mean when you struggle things doesn't get your way. Maybe God has better plans. Maybe for once letting go of thinking too much and let God do all the thinking isn't that bad. Maybe for once going with the flow would be pretty nice, instead of pushing against it, trying to make it go our way, or what we think is best for us. After all, we mere mortals know so little, the tip of the iceberg, and act as if we know it all.
Posted by EFF at 8:58 AM No comments: Links to this post

I don't write often, but when I do, I get emotional

The problem with humans? We not only have the capability to love or to hate someone, but also to miss someone. It's because we are genetically programmed to feel lonely, requiring the constant reminder and reassurance that someone will be there for us, no matter how distant they are. And here we sit, feeling lonely, and then we start missing that one special person, or persons.
And at this very moment, the only thing left to do is to hope that special person too, is missing us. :)
Posted by EFF at 10:17 PM No comments: Links to this post

What are you going to do? Cower in shame or fight back and prove their sorry assess wrong?
Posted by EFF at 7:36 PM 1 comment: Links to this post

I think people who are assholes will remain assholes no matter what even though they have those 'paper qualifications' to prove to the world how much smarter they are supposed to be than us mere mortals.

I guess once they took to many tests to get to the much appreciated 'paper qualification' they forgot how to act civilized anymore.

I guess ignorance is bliss.
Posted by EFF at 8:23 PM No comments: Links to this post

I guess I got an epiphany yesterday. Or was it a day before because I just forgot about blogging it and went to work instead?

Anyways, most of the people who are my seniors already are packing their bags and leaving the hospital, as MOs. I guess it really is a bitter sweet moment, as HOs you do all the fucked up donkey work, get screwed from all sides, work not only as the so-called first liner, but also as the professional PPK to send blood, to take all the vital signs when the nurses are enjoying their chats in the pantry, and also to trace the results and get into the constant war with the lab staff just to make sure that the patient's blood results are doing fine. Yeah, that's what you go through as the HO. Although we are in that situation, the specialist always have our asses covered. No matter what. And now, that safety net is gone, and you have to survive on your own in this world. So they left, with smiles, but maybe their hearts are beating so fast, they couldn't even realize it, wondering "What will be the challenges that lie ahead?"

As I saw them walking away, maybe walking with their heads held high as they finished the 2 years needed to be call a full pledged doctor, I realized that no matter what, footsteps of them will always be in the hospital. Then I got that epiphany, maybe I want to be remembered for the good reasons. I want my stay to be memorable as a good doctor, as one who actually tries to save the world from devastation.

Maybe that's what I'll do in the few months to come before I say good bye too.

And after that, we all will part ways too. What's left? Just memories. And maybe to some, the bad memories will be remembered more rather than the good ones.
Posted by EFF at 8:48 AM No comments: Links to this post

Maybe I didn't get the memo. 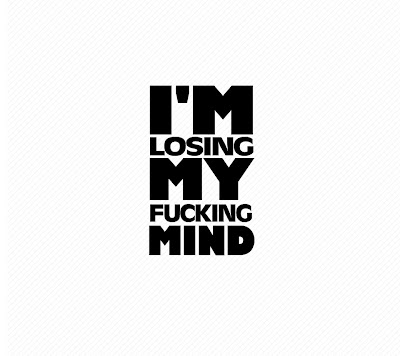 This totally explains how I feel right now.

It has been a great deal of time ever since I last blogged, because suddenly I just felt like it wasn't personal anymore.

But I'm losing my fucking mind here. I needed to rant out.
I didn't want to call my besties and bother them with my so-called-the-world-would-end-for-me problems, because they really aren't, it's just the fact that I'm being overly dramatic, or maybe the fact that I really just wanted the attention.

I really don't know how long I can stand being in the position I am right now. Unsure.

Although I've planned so many things for my future, it seems pretty bleak now.
Praying to God, maybe not hard enough to show me the light for the future.

It's tough. Life is tough. Maybe all the story books when we were young should have given us the heads up instead of ending happily ever after like Cinderella, Snow White or whatever princess they created as a part of consumerism and the parents and children will eat it all up and spend countless amount of hard earned money on things like this.

First of all, about work.

I don't get why some people have to be so mean when accepting referrals. Or why some people question every single thing that you do, as if it is totally wrong. Weren't you one of us in the first place? Didn't you feel how it felt like to be judged under a microscope trying hard not to stand out to much because of the uncertainties that you have? Didn't you know how much it hurts when every single thing you said is replied with a shout? Weren't you a human first before you became the so-called life saver or physician?? Did you hit your head hard on a brick on the road to success?

I could feel him falling out of my grasp. It never really was a relationship anyway, maybe just a one sided, official one for both of us. Now it seems he have found someone who suits him better. And why am I feeling jealous? He never was mine in the first place.

I keep thinking about the one who I told I like him and super freaked out too. Wondered what could have been if I didn't say I liked him. Or maybe if he felt the same way that I felt. But I guess it will always be a wonder. Because he doesn't feel the same way. That, I know.

And the other one, I'm not even sure what that one feels about me. Why are they so complicated? I can't read feelings like I read books.

Which brings me to the third thing, I can't seem to concentrate to study. I try my best to read, but end up staring at the words in the book, which sort of jumble up, trying their best to make my mind more messed up than it already is.

The worse part is, the more I read, the more I feel insecure, as if I didn't know anything about anything from the start.

What is wrong with this feeling?

Why does everyone else seem like they know what they are doing?

Or is it just me being lost now. Maybe I didn't get the memo.
Posted by EFF at 11:50 PM 2 comments: Links to this post

life as it is

As a doctor, it's a norm to face death almost every single day.
It is however different if it is one of us on the other side.
It became big news when one of us appeared at the A&E yesterday, lifeless.
Drowned, they said.

I was in the HDU clinic when the word reached my ears.
The name doesn't ring a bell though. We continued to talk on about this fellow comrade, who once was in my seat at this point of time.
He went on and became an MO.

Then one of those in the clinic described how he looked like. I then realized that I met this person before when I was doing one of my peripheral call. He was the MO oncall that night too.
And what made me remember it was the fact that he asked who I was when I handed over the case. He said he never saw me before in the hospital. I proceeded to say I'm already in my 3rd posting. I guess we never really crossed paths.

My heart goes to his family.
It hits close to me as I like to go swimming, and I've been in places like that too.
Running in my head is the fact that I could have been in the very same situation, should I slip up a bit.

I guess what I'm stating here is, we're doctors. We're human too.

It's harder to grasp the truth when you've trained yourself to save others, but when it comes to one of us, we can't do anything.

A colleague at work today was excited about taking his turn off and going to Penang.
He said "I'll be in Penang tomorrow. What will you be doing?"

I turned to him and said "The same thing I do everyday. Try to save the world from devastation."

To which my MO said, "What uniform will you be wearing then?"

And all the HO's in the room turned to her and the very colleague going to Penang said "This white coat."
Posted by EFF at 10:03 PM No comments: Links to this post